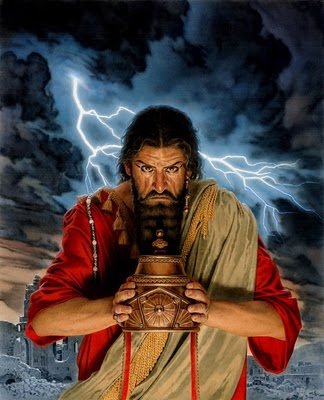 The poster for Nabucco, a gorgeous watercolor by Mark Stutzman. Although it's one of Verdi's most popular operas, it has only been performed twice in South Florida. The Palm Beach Opera presented it for the first time back in 1985.
In another life, I used to be a big fan of opera and for some reason my passion for it faded. So it was with great pleasure that I accepted to be part of Blogger Night at Palm Beach Opera's season opening performance of Nabucco by Giuseppe Verdi at the Kravis Center for the Performing Arts.

Last night, the idea was to "live blog" during intermission, but as my laptop wasn't picking up the wi-fi signal, I tweeted my heart away between curtain downs and curtain ups. My fellow bloggers in crime included one from St. Augustine who drove nearly 4 hours to see the performance. My friend and colleague Hilda Mitrani of Hidden Florida also participated and she managed to squeeze in an informative blog post in between acts.

The Palm Beach Opera and the Kravis Center seem to "get" social media. Daniel Biaggi, General Director of the latter cultural institution, gave props to bloggers as he greeted the audience under the spotlight just before the overture. I later bumped into him in the auditorium, where he seemed excited about all the blogging and tweeting we were doing.

I think it's safe to say my love for opera has been rekindled. It's not so much opera itself but the experience of what amazing things the human voice can do. 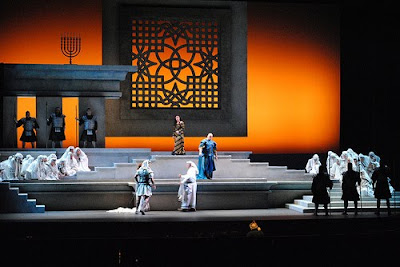 Dress rehearsal for Nabucco by the Palm Beach Opera. The set was impressive.
I tried to tweet the plot of Nabbuco in 140 characters or less, but it was impossible!

Basically, King Nebuchaddnezer of Assyria (aka Nabucco), a hot-headed, warmongering worshiper of pagan gods, really hates the Hebrews and wants nothing more than to see them all wiped out. He takes over their temple and turns them into captive slaves, during which time the Hebrews suffer a great deal, of course, yearning for their homeland. Eventually, Nabucco frees the Jews and gives up his own religion to worship Jehova. This much is based on biblical accounts.

But if you think this is some boring, yawn-inducing take on religion, think again. Juicy drama is served up with great fanfare, including a forbidden love affair between the Babylonian king's daughter Fenena and a Hebrew soldier, Ismaele. Abigaille, Fenena's sister, is also in love with Ismaele but he will have nothing to do with her. The soprano role of Abigaille is an operatic workhorse; it's considered to be the most challenging in all of opera for its roller coaster vocals. 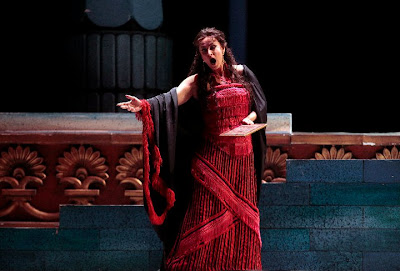 The voice of Paoletta Marrocu will transport you. Seen here playing the bad ass Abigaille in a fabulous costume that reminded me of a Betsey Johnson dress. who knew Babylonians could be so fashionable?
In an opera dominated by fierce and fighting men, a God who smites Nabucco with lightning for his pride and the drama of a people in captivity (complete with costume manacles, even) -- it's the female roles that really stand out. Meek but spiritually strong and righteous, Fenena is a martyr who converts to the Hebrews. Abigaille is her polar opposite: ambitious, stubborn, driven, manipulative and powerful, she's a total bad ass, and for this reason I loved her character. But of course, since she used her power for evil instead of good, her fate is sealed. I think you can guess what happens, but I won't spoil it for you.

My friend Hilda teased me for being so obsessed with the plot. "I just focus on the music," she said. But I guess it's the former literature teacher in me -- I got sucked into all the wonderful drama, which lasted about three hours with two intermissions. Hilda is right, though. The music is wonderful. My favorite was Abigaille's aria in Act II where, completely alone on stage, she laments the loss of her previous self, when she was kinder and softer-hearted woman until she turned into a power-hungry raging bitch. As well, there's the famous chorus Va, Pensiero in Act III when the Hebrews sing about their lost homeland. So esteemed is this chorus that Italian music star Zucchero adapted its melody for modern ears in English. (See the video on Youtube.)

If you've never really experienced opera, Nabbuco has all the high drama, convoluted and incredible plot twists you could ever want in three hours while feasting your ears to angelic voices of all ranges.

Nabucco only plays until Monday, December 13th. Catch it if you can. And if you miss it, don't worry. Three more operas are scheduled for the 2010-2011 season, including two of my favorites: Mozart's Cosi Fan Tutte and Puccini's Tosca. Check Palm Beach Opera for more details.
Posted by Maria de los Angeles at 11:32 AM

I so enjoyed sharing this evening with you and Sheila. Your synopsis of the evening, and especially the opera, are perfect.

Kudos to the Palm Beach Opera team for the exceptional production of Nabucco and the vision to embrace social media.

See you at our next adventure!