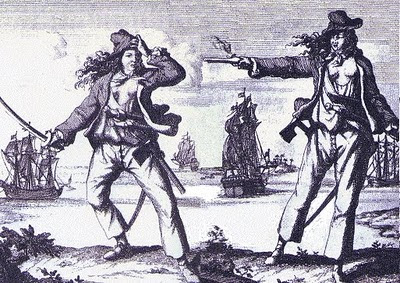 An illustration from a Dutch version of Charles Johnson's A General History of the Pyrates, published 1724. The woman on the right is said to be Anne Bonny.
In the previous installment about Biscayne Bay, I interviewed Nathan Samuels, a Miamian who has studied the legend of Black Caesar. There's another local who's also interested in pirates: Sandra Riley. The South Miami author, scholar and playwright has studied and written about the Caribbean for most of her decades-long career. 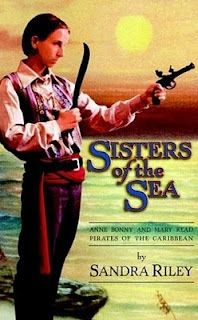 Just before my journey, I met with Sandra in her South Miami home to talk about her book, Sisters of the Sea, a fictional adaption of the historical accounts behind the world's most famous female pirates, Anne Bonny and Mary Read.

A little about these daring women:

Anne Bonny and Mary Read were from two different worlds but ended up together on Captain "Calico" Jack Rackham's pirate ship in the early 1700's. Anne was from a rich Irish family that settled in Virginia. Known for her temper and rebelliousness, she eventually found her way to the Bahamas after marrying a small-time pirate, James Bonny.

Mary was from Plymouth, England and the illegitimate daughter of a woman who had been abandoned by her sea-faring husband. When Mary's legitimate half-brother died, her mother disguised Mary as a boy in order to continue receiving financial support from her mother-in-law. Mary grew up dressed as a boy, eventually becoming a footboy to a French woman and then a soldier in British-allied foot and horse regiments.

Fast forward over many adventures -- including attempts to live as regular women -- both became pirates of the Caribbean. It's said that they fought as fiercely as any man. At a time when women had few opportunities, both Anne and Mary found advantages in cross-dressing and living pirate life on the high-seas with Rackham's crew.

Both women were said to have male lovers on the ship; in fact, Anne was Rackham's lover. But in those days, men thought it was bad luck to have women on board and their gender-bender secret was closely guarded. How they lived as women pretending to be men on board a pirate ship is hard to fathom. That would be hard to pull off today even on a luxury yacht with modern conveniences!

In the 1700s, Calico Jack and his crew were caught by British forces. Anne and Mary "plead their bellies," which gave them a stay of execution -- the law would not punish the unborn child for the sins of the mother. Anne mysteriously disappeared; perhaps her wealthy father in Virginia bailed her out of the dismal fate. Mary met a harsher end, dying from fever in Port Royal, Jamaica, before her child was born.

How much of this is true? Unlike Black Caesar's story, reliable historical accounts exist of the extraordinary lives of these two women; nevertheless, it's the legend that captures the imagination. Anne Bonny and Mary Read have much to teach women about being gutsy and fearless.

If you're interested in learning more about these female pirates and all the research that goes into studying them, here are two unedited interviews with Riley.

Interview with Sandra Riley, Author of Sisters of the Sea, Part 1

Interview with Sandra Riley, Author of Sisters of the Sea, Part 2

Later on my journey, I had the chance to interview Michelle Murillo, a Melbourne-based reporter who also does Mary Read reenactments. Stay tuned.

HOW I KNOW SANDRA RILEY
Sandra Riley's partner, Peggy Hall, was one of my English teachers in high school. She was partly responsible for inspiring me to be the writer I am today. I bumped into Riley and Hall randomly two years ago while riding the Metrorail to the History Miami. We've been in touch ever since.

Retired from teaching, Riley and Hall are an important part of South Florida's homegrown literary scene. Among dozens of creative endeavors, Hall has penned many a poem and Riley has written and directed many a drama. I love these ladies! You can learn more about them on their website, The Parrot House.

PIRATE GRUB
If you're in the mood for pirate atmosphere, grab a beer and a sandwich at the The Pirate Republic Seafood Grill & Bar. Located on a quiet spot on the north bank of Fort Lauderdale's New River, the restaurant is generously decorated with pirate flags, life-size figures and more.

BARREL OF RUM
Rum was an important beverage in pirate world. Look no further than Miami-based Burr family to learn everything about this amazing cane spirit, which influenced the shape of Caribbean and American history. Robert Burr's latest post on Barbados rum is a great read. Oh, and no self-respecting "pirate" should miss the Rum Renaissance Festival in Miami Beach next year.

Special thanks to Annie's Costumes, Visit Florida, The Pirate Republic Seafood Grill & Bar and Hyatt Pier 66 for supporting the Key West to Fort Lauderdale leg of the trip.
Posted by Maria de los Angeles at 12:17 PM