Trail of the Pirates: Biscayne Bay 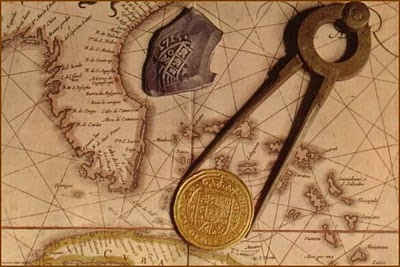 Back in October, I attended a lecture at the History Miami museum about Black Caesar, one of South Florida's legendary pirates. Nathan Samuels, a graduate student in Science Education and an Educator at the museum, told us all about this pirate who was renown for his fierceness, size and strength. Here's a summary of what I've learned from Samuels and others on my journey.

Yes, right here in our own Miami backyard, we have pirate lore that's worth a bundle. If you've ever gone boating in Biscayne National Park and navigated through Caesar's Creek, you know its namesake. The creek is a channel that provides access to the ocean and separates Elliott Key from Old Rhodes Key. The entire upper keys system of barrier islands forms a boundary around Biscayne Bay.

Caesar's Rock, a small island between the two keys, was supposedly one of Black Caesar's local lairs. Legend has it that he'd anchor on exposed stiff limestone, partially capsize the ship with water pumps, lower the mast and use camouflage -- all to avoid detection. Black Caesar and his crew would then lie in wait to ambush ships seeking refuge in the bay's calm waters. This could explain accounts of pirate ships "appearing out of nowhere" and why it was practical for pirates to have smaller and faster ships. 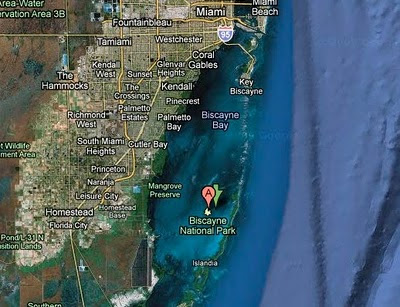 An aerial view of the area.
Legend also has it that he buried treasure on Elliott Key, but none has ever been found (or at least none has ever been officially reported). The idea of burying treasure is more of a pop culture notion than a practical reality. Seafaring life was dangerous, disease was rife and life expectancy was low. Saving your loot was pointless when each day could literally be your last.

Why do I keep saying "legend has it" and "supposedly"? Because Black Caesar may be more myth than fact. He could've been an African prince or tribal chieftain who escaped from Spanish slavers; other accounts speak of a mulatto slave who escaped from a Haitian plantation circa late 1700s. It's also possible that there were two -- if an earlier one inspired fear, a later one could adopt the same name. PR spin was important for pirates and just like celebrities today, they took advantage of reputation.

In a world where black skin meant a life of slavery, piracy was a real option of freedom. Pirate societies adopted principles of equality and democracy, which were even appealing to sailors under contract with a country's armed forces. A sailor's life was often difficult at best and hardly rewarding in terms of pay. Some sailors even deserted their commissions after they'd compare notes with pirates. Naval captains could be sadistic and draconian, whereas pirate captains were accountable to their crews.

So think about it: if you were black, which would you choose: a life of brutal slavery or the free life and camaraderie of piracy? I think the answer is obvious. And there were, in fact, many black pirates, according to Samuels. Ditto for sailors. Why put up with a jerk boss and crappy low-paying job when you could be a pirate?

Pirates had certain advantages over regular sailing operations. Because they would take navigational risks and lurk in uncharted waters, pirates could draw maps that were often more accurate than those drawn by official cartographers. Although sailors used celestial navigation techniques, it is a wonder anyone got around on water in a world without satellite imaging, depth finders and GPS.

The boardwalk at Biscayne National Park in Homestead. Most of the park is actually water and some of it may have been the site of Black Caesar's pirate domain. You don't need a boat to enjoy the boardwalk or the visitor's center at the park; it's well worth a visit. 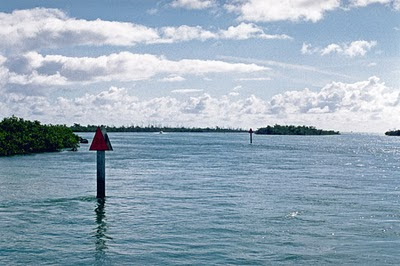 Caesar's Creek with modern-day channel markers. Photo courtesy of Park Vision. Visit the link for some additional great photos of the area.
What ever happened to Black Caesar? No one is really sure. Depending on which Black Caesar you're talking about, he might've joined infamous Blackbeard's crew only to be caught, tried and hung to death in Williamsburg, Virginia. He may have also joined Jose Gaspar, another legendary pirate from the west coast of Florida, whose existence is also doubtful.

But the idea that pirates may have navigated Biscayne Bay is most likely true and hardly far-fetched. Florida's east coast was like the I-95 the Spanish Main. Every cargo vessel on its way back from the New World had to pass through the Florida Straits in order to take advantage of the Gulf Stream, the strong current that flows up the east coast on its way to Europe. It was practically a traffic jam out there and there are hundreds of shipwrecks along the coast to prove it.

So the next time you're on the water, or simply looking at it from any vantage point between Miami and the Keys, think about Black Caesar and all that might've happened out on Biscayne Bay. Even if he didn't exist, he's one of Miami's best legends.

On my way up from Key West to Fort Lauderdale, I stopped at Biscayne Bay National Park and since I wasn't able to squeeze in an interview with Nathan on the same day, I cheated a little and met up with him at History Miami a few days prior to my trip. The two-part interview is about ten minutes long in total; if you're interested in pirate history, take time to check it out. The affable Nathan has much information to share!

If you haven't already done so, visit the permanent exhibit upstairs at History Miami. You'll find not only a section devoted to pirates, but also a whole range of information about South Florida from prehistory to the present day.

Coming soon to Miami: an underwater Maritime Heritage Trail at Biscayne National Park, where you'll be able to explore six wrecks -- spanning nearly a century -- by snorkel or scuba.

Special thanks to Annie's Costumes, Visit Florida, The Pirate Republic Seafood Grill & Bar and Hyatt Pier 66 for supporting the Key West to Fort Lauderdale leg of the trip.
Posted by Maria de los Angeles at 12:13 PM

Great post and very informative. I am definitely going to check out the Miami History Museum. Anybody know any other good sources for Florida maritime history?

Hi Jack! Well, the Mel Fisher Maritime Museum is a good source. And you can also check out the National Park's System Maritime Heritage website: http://www.nps.gov/history/maritime/

Oh and how could I forget! The St. Augustine Lighthouse and Museum:
http://www.staugustinelighthouse.com/

They have a great archeological program and shipbuilding program.