On my third day of Trail of the Pirates, I finally hit the Treasure Coast, so called because of the numerous Spanish galleons that sank roughly from Hobe Sound to the south and Sebastian Inlet to the north.

While in Stuart, I crossed the causeway over the wide St. Lucie River to Hutchinson Island, a barrier island so tiny in some sections, it seems as if it could be swallowed by the ocean to the east and the river on the west. Here you'll find Gilbert's Bar House of Refuge, built in 1876.

In the 19th century, the U.S. Government commissioned ten houses of refuge to help mariners who shipwrecked along the coast of Florida. Back in the day, Florida was sparsely populated and there were few, if any, resources for stranded sailors. Imagine not only injuries, but the bugs, the lack of fresh water, food and no roads. In short, if your ship was wrecked and you didn't drown, you were still screwed. These conditions, which spelled a slow demise at best, make today's survivor show contestants look like a bunch of pansies. So the government stepped in to help sailors -- yes, that's how busy shipping traffic was up the Treasure Coast. Houses of refuges were absolutely necessary.

Today, the Hutchinson Island landmark is a maritime museum and the only house of refuge still standing.

No, you can't buy drinks at Gilbert's Bar. In fact, there isn't a kitschy beach side touristy bar anywhere in sight. It's pure beach bliss.
A famous east coast shipwreck, the Georges Valentine, lies a mere 100 feet off shore. In 1904, the Italian brigantine set sail from Pensacola, Florida with a load of mahogany intended for Buenos Aires, Argentina. A turbulent storm took it off course as it passed near Havana -- that must've been some storm because that's way off course! Seven of the ship's twelve-man crew survived thanks to the rescue efforts of the house of refuge's keeper.

The house, as seen from the St. Lucie River side. A local gardening program has eradicated invasive plants and replaced it with native vegetation. The sea oats are lovely.

The porch facing the ocean. Gilbert's House of Refuge is available for small weddings and special events. It's quite romantic, actually.

The parlor inside the house. Furnishings are original or authentic reproductions. The inn keeper would've lived here with his wife and kids; rescued sailors stayed upstairs. You can self-tour the interior and also see the bedroom and kitchen.
WHAT ABOUT PIRATES?

It's the land on which the house was built, Gilbert's Bar, that ties the area's history to pirates. Bar is short for sandbar and it's here where Don Pedro Gilbert, a former privateer, ran operations in 1832 on his schooner. Privateers were officially licensed by governments in times of war to take ships of enemy countries. Many privateers turned pirate as they sought fortune on their own without letters of marque, which were issued by governments authorizing pirate vessels to attack and capture enemy vessels.

Think of it this way: let's say your country is at war with your neighbor and you want to go take all your neighbor's crap away from him because you can reap some spoils of war by giving the navy a helping hand. Well, it's OK as long as the government tells you so, hence the letters of marque. But if you're not at war and you don't have permission from the government, it's technically illegal. What if you still want to do it? Simple: you go pirate and do the same thing on your own. If you think this doesn't happen in some form or another in today's world and economy, think again! 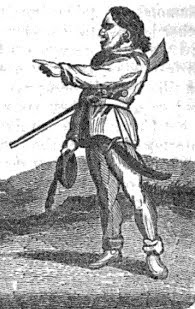 As a pirate, Gilbert also used ambush tactics: the Gulf Stream, which is about two miles away offshore, was a super highway for navigation. At night, Gilbert would light bonfires on shore, tricking captains into thinking there might be sailors in need of rescue. Like moths to a flame, the ships were drawn to the treacherous reefs.

Gilbert had a reputation of being ruthless and the law would eventually catch up with him. After a stint in Africa, the U.S. Government brought him to trial in 1835, where he was hung at the gallows in Boston, his rotting corpse for all to see from the harbor in a statement that clearly stated: "this is how we treat crooks." At this point, the 1820 U.S. Piracy Law had been in effect 15 years, forbidding piracy as well as slave trading. Gilbert is technically the last American pirate to be executed for his crimes, although Nathaniel Gordon would be tried as well in 1862 for smuggling slaves.

Rocks like these can be seen as far south as Jupiter, but the formations in Martin County are particularly stunning.
There's another, if not directly pirate-related, connection between Hutchinson Island and my journey's end, St. Augustine. The rocks along Martin County's beaches are outcroppings of solidified ancient shell sediment known as Anastasia Formation. The rock is also called coquina and was quarried on Anastasia Island in St. Augustine to build the Castillo de San Marco fort, completed in 1695. In Martin County, you can see impressive examples of coquina, an amazingly hardy yet flexible building material that would help St. Augustine defend itself against foreign invaders and pirates.

I had the pleasure of interviewing Jim, museum keeper of Gilbert's Bar House of Refuge, on the day of my visit. If you go, hopefully he'll be there. Tell him I sent you.

PIRATES
A pirate festival takes place every year in historic downtown Stuart, which is in between the old Flagler tracks and the St. Lucie River. It's quaint and charming, with a definite old Florida feel. The Treasure Coast Pirate Fest is free but a portion of all proceeds benefit Stuart Heritage, Inc. and the Maritime and Classic Boat Museum.

BEACHES
Hutchinson Island is breathtakingly beautiful for its simplicity, which is why I think this section of Florida should also be called the "Zen Coast." This tiny sliver of island separates the ocean from the St. Lucie River, with nothing but dunes, rock formations, sea oats, waves, the sound of surf and blue skies to please the senses. It all seems so pure -- a few hours of doing nothing here will surely help unwind. Check out Bathtub Reef Beach; hopefully it will be open for swimming and if it's not, bring a picnic basket and simply bask in the natural scenery. Other equally peaceful public beaches, with plenty of parking and access, abound on the Treasure Coast up A1A.

HOUSES OF REFUGE
For you Miamians who don't want to make the the three and a half-hour trek up the coast, check out the visitor's center at Biscayne National Park, which was featured earlier in this series; it's modeled after the original House of Refuge in the Miami area.

Special thanks to Annie's Costumes, Visit Florida, Discover Martin and Hutchinson Island Marriott Beach Resort and Marina for supporting this part of the journey.
Posted by Maria de los Angeles at 2:58 PM