Croquetas de bacalao (codfish croquettes) at Versailles on 8th street in Miami.
It all started with a simple question: who makes the best croqueta in Miami?

And so the Croqueta Crawl was born. Organized by @lizawalton, the Croqueta Crawl wrangled a hungry crew of friends and social media acquaintances at iconic Cuban restaurant Versailles yesterday morning to embark upon a culinary adventure: five restaurants in five hours sampling all the fried goodness our tummies could take. GM sponsored the croqueta caravan: about 30 of us schlepped around in a fleet of nine cars.

Croquetas, aka croquettes, originated in France but can be found in many cuisines around the world, usually eaten as a fast food snack or appetizer. A basic croquette is simply this: a cylinder-shaped fritter filled with a paste made of mashed potato combined with some kind of meat or vegetables, deep fried, and sometimes encased in breadcrumbs or cracker meal. The French verb croquer means "to crunch" so some kind of crispy exterior normally surrounds the filling.

Being in Miami, naturally, what obsessed us yesterday were the Cuban variations of the croquette, handed down from Spain to the former island colony. In Spain, the classic version of the fritter consists of serrano ham combined with béchamel sauce and fried without breading. In Miami, the traditional Cuban croqueta is made with ham, heavily breaded and served often with saltine crackers, ketchup or lime. The croqueta is ubiquitous and served anywhere Cubans go a noshin' -- including bakeries and ventanitas (the window at a Cuban restaurant were coffee and finger food is served).

We must've scarfed down over a dozen croquetas each yesterday as nearly fifty of us convoyed the streets of Miami, checking out recipes at tried and true Miami establishments: Versailles, Islas Canarias, El Brazo Fuerte Bakery, Ricky Bakery and Gilbert's Bakery.

By show of hands, Ricky Bakery won the best croqueta award based on the following criteria:
Texture was key. The perfect croqueta expresses a delicate balance: it can't be too mushy on the inside, but it shouldn't be overly crunchy on the outside, either. Imagine a firm mattress that's still soft to lie upon without caving in -- that's what your mouth should experience when you bite into a croqueta.

We listened to PALO!'s music while riding around in our GM cars. Steve Roitstein, band founder, seen here assessing size and firmness. "Size does matter," he said, while biting into the codfish croqueta to make it the same size as the chicken. "I'll take whatever I can get," I replied.
For me, it was tough to choose. Versailles had a really tasty codfish croqueta (but please, spare us the tartar sauce). I also enjoyed the croqueta at Islas Canarias, made with flavorful sweet ham and delicious with a squeeze of lime. Unfortunately, El Brazo Fuerte didn't really do anything for me. A cheese croqueta is too much like a mozzarella stick and the sweet pastry cheese didn't go well with salty breading.

Islas Canarias has been family-owned for over 30 years. Many croqueta recipes are hand-me-downs from previous generations. The owner's daughter told us sweet ham was one of the ingredients, but she wouldn't reveal more.
Ricky Bakery's ham croqueta was just right, but the flamboyant and friendly host, who also boasts the most gorgeous pair of biceps and pecs this side of the Palmetto, fried up a delicious spinach variation that made me fantasize about a spicy curry dipping sauce. Such a thing may sound anathema in Miami, but hey, a croqueta can be anything you want it to be, provided it follows the basic recipe. Crazier things have been concocted in Miami kitchens. The cross-cultural, multi-ethnic, religion-defying Jewban Sandwich comes to mind.

The womenfolk and gay men in our crew really weren't influenced by Ricky's biceps and pecs at all. Really! We let our taste buds be the impartial judges.
Finally, full and about to pop a few seams, Gilbert's Bakery won my belly with a delicious variations on the traditional Cuban croqueta, including piquillo pimento (Spanish red pepper) and a vegetarian Romesco style served with almond aioli. After an overdose of ham croquetas, the flavors of Spain woke my palate up from its stupor. Gilbert's also gets props because Gilbert Jr., the original owner's son, spent time with us explaining the history of Spanish and Cuban influenced food.

Gilbert's Bakery offered delicious variations on the croqueta, influenced by traditional Spanish seasonings.
But back to the winner. At the end of the event, I won a prize for best croqueta tweet: "take a bite out of this meat, baby."

The croqueta king in all his sinewy glory. The ham wasn't bad, either.

Ricky should really be on the Food Network. What a personality! 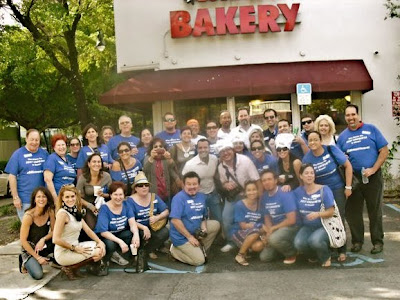 The crawl crew. Photo by @miamishines.
Kudos to @lizawalton and GM in the Southeast for putting together a great event. It wasn't just about the food, of course, but about the joys of camaraderie. We shared heaps of it yesterday!
Posted by Maria de los Angeles at 11:14 AM

Sorry I missed this (although I wouldn't have been able to try the ham - traditional - ones). Still, I may have to make a special trip to Gilbert's! Sounds amazing!

This is the best idea in Miami history! I've always been partial to the Islas Canarias croquetas, but I will definitely be visiting Ricky's in the very near future (for the croquetas, of course).