Trail of the Pirates: Hoist the Jolly Roger! 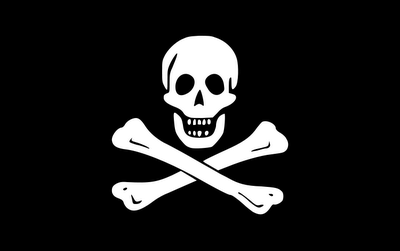 I recently came up with this quote: "When the going gets tough, hoist up the Jolly Roger."

The Jolly Roger is the classic skull and crossbones image we've come to associate with piracy. Historically, pirate ships would raise the flag (sometimes even a plain black flag) to warn ships and encourage a surrender. Basically, the Jolly Roger signified the following: "We're not bound by the usual rules of warfare or engagement. Surrender the booty and we'll leave you alone."

Of course, I've turned the meaning of this around a little. To me, hoisting the Jolly Roger is a metaphor for life. When things go wrong, tell those wrong things to back off and get the hell out of the way. It's by getting rid of everything that blocks you that you find your real treasure.

Anyway, I had hoped to do my entire Trail of the Pirates series without interruption from other posts, but certain obligations prevent me from doing so. Please pardon the pirate interruptus and don't worry! I'll be back in a few days days, with Indian River County and St. Augustine stories to complete the series, including three exclusive interviews: Taffi Abt-Fisher, the famous treasure hunter's daughter; Pat Croce, founder of the St. Augustine Pirate and Treasure Museum that recently opened in St. Augustine; and Captain Tom, founding member of Maidens Pub Krewe of the Black Heart, folks who worked toward the idea of a Pirate Gathering idea years ago and are also raising funds for maritime history education in the St. Augustine community.

You can see a gallery of Jolly Roger flags over at Wikipedia. Here are a few. 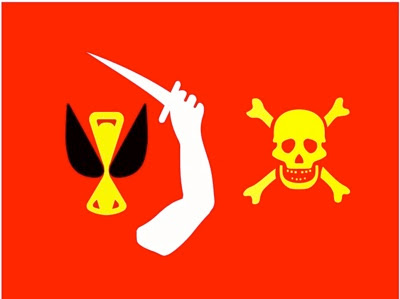 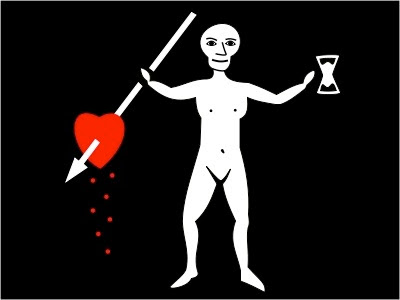 If you want to see an original, head over to the St. Augustine Pirate and Treasure Museum. Pat Croce purchased the only two known in existence. One is on display. 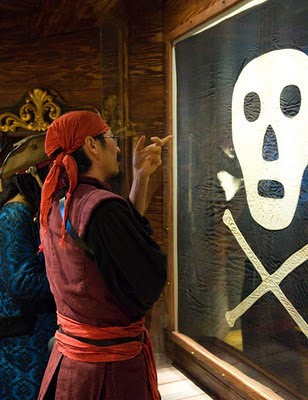 Photo courtesy of St. Augustine Pirate and Treasure Museum. Taken during Grand Opening on December 3.
So in the meantime, fair winds and groovy sailing!
Posted by Maria de los Angeles at 10:36 AM